The Story of Our Beginning 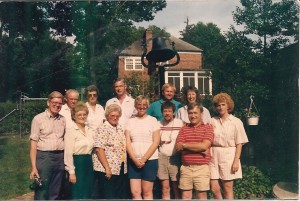 During February 1988 Jean Bushnell founded a monthly newsletter expressly for McCoy collectors. Jean simply had the desire to communicate with other McCoy collectors. Being an avid collector she knew many collectors through personal contact, and knew others by their advertisements in various Antique and Collectible publications. She rightfully thought that earnest McCoy collectors shared in her desire to receive and share information, and would like to have a specialized means to buy and sell the pottery they loved.

When Jean published the first issue from her “kitchen table publishing empire,” as she termed it, there were only 15 subscribers. New subscriptions were coming, but then after two months, Jean had another thought. She said in the April issue, “The 15th and 16th of July are the dates for the major pottery show in Zanesville, Ohio. Wouldn’t it be nice if we could have an informal rendezvous there during that weekend?” A total of 12 serious collectors of McCoy pottery responded to the invitation, and an annual reunion of lovers of McCoy pottery was born.

After being discussed for several years, the current office-holders decided that the time had come to work toward becoming an official non-profit organization. During the time since the July 2001 reunion a set of draft by-laws were prepared and was submitted at our business meeting during July 2002. So, after our 15th annual consecutive gathering it was overwhelmingly decided to officially organize as a non-profit organization, and the McCoy Pottery Collectors’ Society was born.

In January 2003, the inaugural issue of the quarterly Journal of the McCoy Pottery Collectors’ Society was published.